Whilst pretty basic, the rooms were fine with a little kitchenette attached to the sleeping area for boiling water etc.. The accommodation arrangements also worked very well with the kids occupying the room next door which meant that they could go on the early morning run and yoga sessions planned by B and M without waking us up.!

In the mornings we all met for an al fresco breakfast next to the pool where we were treated to Greek yoghurt and fresh fruit. it was then off to the beach (We arranged a cab for Dad) where we basically swam/snorkelled/sunbathed most of the morning with a bit of fishing off the breakwater (not hugely successful) and hole digging (by the kids - much more successful). 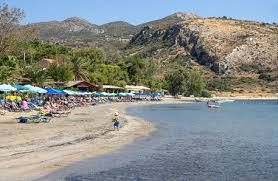 At lunch we ate our own body weight in Greek salad (what else!) and indulged in a local dish of "cheesy chips" and granita and then headed back to the Hotel for an afternoon of siestas (adults) and running around like mad things/diving into the pool (kids). Towards the end of the afternoon as the sun set picturesquely behind the mountains I would wander down for some more sunbathing/book reading by the pool and a leisurely swim. 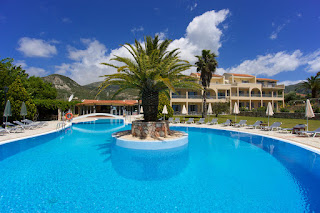 In the evening we all walked down to the beach/main street and decided on which restaurant we wanted to eat at. As it was a fishing village most of the restaurants had an ice cabinet out the front displaying the day's catch and most offered a very reasonable deal on meals for two (tuna, calamari and sea bass being particular favourites) which usually included wine.

Everyone at very well and I was particularly taken by the grilled calamari at the Lighthouse restaurant. All of the restaurants were right on the beach overlooking the sea and it was a terrific place to eat. The kids could play on the beach whilst the adults could finish the meals at leisure. We would all then head back to the hotel with dad and I (and occasionally B) breaking the journey up with a quick trip to a small bar which was handily located on the road back to the hotel. The bar was also the source of some football (Chelsea) and a pub quiz as well as a duet between the landlady's mother and Dad one evening (1). Dad also managed to win a raffle (Euro 29) which was also very handy.

We did not do any exploring other than hiring a couple of boats for a trip up the coast. E. and the kids bailed out very early as the wind was blowing and it was quite choppy which proved to be a very sensible decision. The journey up the coast was fine albeit a bit bumpy. However, we had a real problem in finding somewhere to stop for lunch and ended up mooring next to a beach which could only be accessed by a stony/rocky stretch of water which was a nightmare and then we could not find any shade. Dad had to stay on the boat because of the access difficulties and felt seasick all the way back as we spent a couple of hours crashing from wave to wave as the wind blew harder as we were steering into the wind - I also lost my cap and B 's fishing lines got tangled. Not a success!

Other than the boat trip, it was a terrific holiday - very relaxing and the kids were clamouring to go again almost as soona s we left.

Posted by Taitamtales at 4:23 PM