This has been a spectacularly poor “post a day” November for me and I was very much at risk of recording “nil points” on the historic blog posts that I have managed for this annual Autumn blogfest probably for the first time since I started keeping count.

This has partly been due to the fact that we were back in Blighty for a birthday party for my Sister at the beginning of the month and, as a consequence of some unfortunate planning on my part, I was then back in UK on business for much of the second week of November. For part of the following week, I was in Abu Dhabi for a conference and last week was spent catching up on all the “to do” items that were awaiting me once I was finally back in the office for a decent length of time. I was also supposed to be starting a trial (again in Abu Dhabi) but that was postponed at the last moment so that involved a certain amount of rushing about.

The other reasons for my lack of productivity (I am almost finished with the excuses so please bear with me for a little longer…) is that I have been “in training” (in the loosest possible meaning of that term) for the Dubai 92 cycle ride on December 15 which has rather eaten in to my spare time.

As noted in earlier posts, we have recently relocated to the Desert and one of the advantages to our new home is that there are plenty of paths and areas to cycle and, rather handily, there is an 8 lane motorway just outside the entrance to our community which has not been opened to traffic yet but is sufficiently complete to allow a uninterrupted 3km ride down towards the Al Ain road (and a rather longer 15kn ride up towards Arabian Ranches in the other direction once one has navigated the various obstacles barring access). As can be seen from the picture below, our own private "cycle path" has also proved popular with the kids. 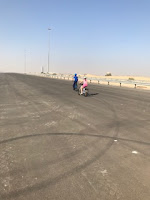 The actual “training” started somewhat fitfully in September when I tried to spend more that the odd 20 minutes pootleing around the development and whilst interrupted by a trip to Seoul and the various trips to UK mentioned above is now a bit more focussed and regular although whether it will be sufficient to see me complete the 92 Km course remains to be seen - the roads around Dubai are being closed for a few hours but in order to take advantage of this, riders have to finish within a set period of time which requires an average speed of 26 Kph. I can probably keep this up for a little while but 3 ½ hours is going to be a real challenge! I have however just bought myself a proper road bike in the recent Dubai 3 day sale (picking it up this evening) so we shall see if that makes any difference to my performance.
Posted by Taitamtales at 4:03 PM