Last Tuesday marked A’s 15 birthday – it seems barely credible that 15 years ago he was born in the middle of a torrential down pour in Bristol as I high tailed it back from Cyprus where I had been on holiday with my parents (his arrival was a little unexpected in my defence…). In the intervening years, A. has lived in London, Hong Kong and Dubai so has lived in English, Asia and Arabic society and has been educated in a range of different schools including an English Schools Foundation ( ESF) school in Hong Kong (Quarry Bay on HK Island) and the Canadian International School (at Aberdeen on HK Island) before completing his primary education at Wellington Primary School (part of the GEMS for profit school network) in Dubai before going to his current school – a secondary school in the Dubai not for profit sector where he has just embarked upon his GCSEs. I suspect that his background has certainly given him a knack of making friends although unfortunately it does not seem to have particularly assisted his linguistic abilities!

He has shot up in the last year and is now a good 6 inches taller than his Mother (but some way to go before catching me up). He is still into his gaming – not so much Minecraft these days but he certainly he enjoys playing his PS4 and is taking ICT and computer studies as GCSEs so computers and devices (like every child it seems these days) play a large part in his life. He does find time for other activities – he finally beat me at table football – on his 15th birthday and we have been playing table tennis on the table we got him for his birthday so that will no doubt feature in future competitions! He is currently practising for his Grade 4 piano (notwithstanding last year’s debacle when he practised the pieces for one board only to find out on the day of his exam that his teacher had entered him for another board….) and while it is fair to say that piano practice is not at the top of his list of favourite things to do, when he gets into the swing of it, he seems to enjoy it and is in fact pretty good.

He has a good circle of friends at school and remains the easy-going, friendly chap personality wise that was so characteristic of his earlier years. Happy Birthday A.! 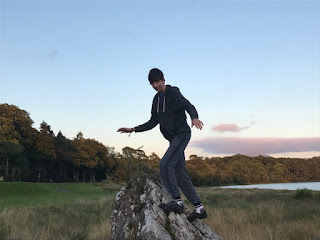 Posted by Taitamtales at 5:10 PM